A History of the Law Center

On December 16, 1946, in response to a lawsuit by an African-American resident seeking to attend law school at a state institution, the Louisiana State Board of Education took “positive steps to establish a Law School for Negroes at Southern University…to be in operation for the 1947-1948 session.”

Plans for the law school were approved by the State Board of Education at its January 10, 1947, meeting. On June 14, 1947, the Board of Liquidation of State Debt appropriated $40,000 for the operation of the school. The Southern University Law School was officially opened in September 1947 to provide legal education for African-American students.

Southern University Law Center graduates, beginning with the legendary civil rights attorney, political leader, and educator Jesse N. Stone, Jr., Alvin Basile Jones, Leroy White, Ellyson Fredrick Dyson, and Alex Louis Pitcher of the class of 1950, have spread across the state and nation as trailblazers in the legal profession, securing equal rights for others. To date, the Law Center has more than 2,500 graduates and is one of the nation’s most racially diverse law schools. 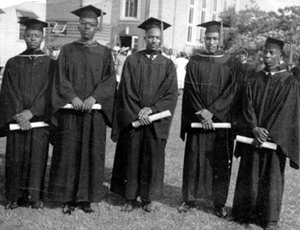 With their commencement, members of the law school’s first graduating class of 1950 became much-needed additions to the legal arena, for African Americans. Pictured from left are Alex L. Pitcher, Leroy White, Ellyson F. Dyson, Jesse Stone, and Alvin B. Jones. 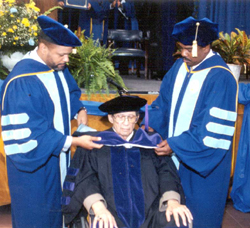 Charles J. Hatfield, whose lawsuit resulted in the establishing of a law school at Southern University, was the recipient of the Law Center’s first Honorary Juris Doctor during the May 2002 Commencement. He died June 14, 2002 at the age of 87.