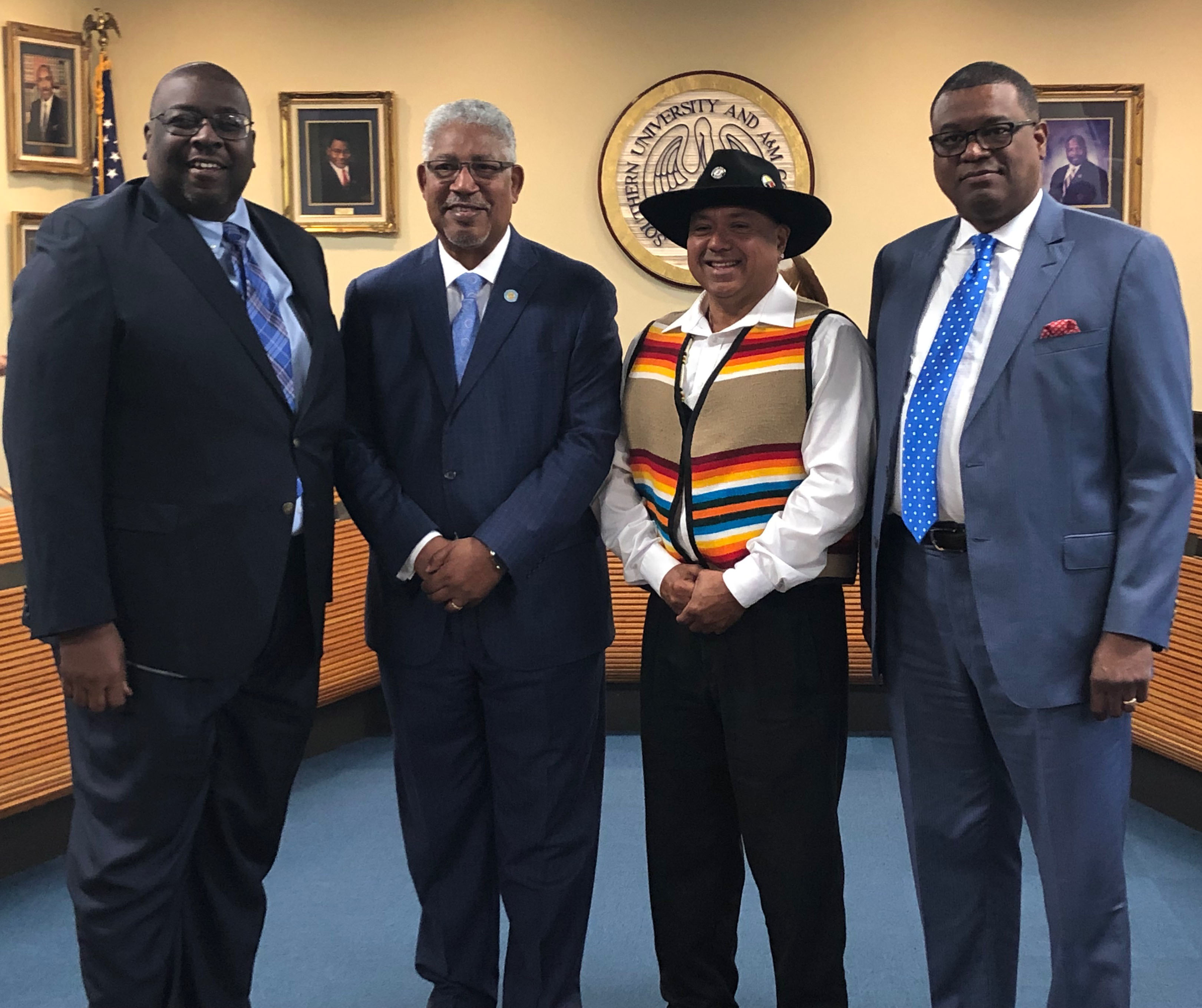 Since starting law school at Southern University Law Center, Adam Crepelle envisioned the campus adding Indian law courses to its curriculum. After Crepelle crossed paths with Ernest Sickey, former Chairman of the Coushatta Tribe of Louisiana, who shared the same goal, a conversation began. The quest to learn how to aid and support an underrepresented community, led to the founding of the Native American Law and Policy Institute (NALPI).
"We, at the Southern University Law Center, are excited to offer this program because there is a shared history and connection between tribal peoples and other peoples of color that needs more attention," said Creppelle, managing fellow of the NALPI. "Moreover, the NALPI is the only Indian law program in the Southeastern United States. This will raise awareness of tribes in the region and their unique history."
Currently, the institute offers a Federal Indian law course and a host of seminars and conferences, including the Louisiana Rural Economic Development Summit, All Roads Lead to Chaco Canyon, and the Tribal Courts and Tribal Sovereignty Symposium. Furthermore, the Law Center leads the charge as the first and only historically black college and university (HBCU) to have an institute of this magnitude.
"The Native American Law and Policy Institute was created as a catalyst to raise awareness about Native American tribes and provide an outlet where they can receive educational, advocacy, legal and policy assistance," said John Pierre, chancellor of the Southern University Law Center. "As the first HBCU with this type of institute, we have the opportunity to train our students in an important and developing field, which will increase our competitiveness."
With the creation of the institute, the Law Center has established partnerships with multiple tribes including the Choctaw Nation of Oklahoma, Chitimacha Tribe of Louisiana and Tunica-Biloxi Tribe of Louisiana. At its September meeting, the Southern University System Board of Supervisors approved the recent partnership between the United Houma Nation and Law Center to provide assistance in obtaining federal recognition.
"Our alliance goes beyond traditional professionalisms and crosses over the business of
expectations," said David Sickey, tribal chairman of the Coushatta Tribe of Louisiana. "The common goals woven into the nature of our relationship are building a legacy of preservation and progress. Preserving the histories and ancestry of the tribes while progressing forward to open doors and afford new opportunities."
In sustaining these relationships, the Law Center steadily acknowledges trailblazers that campaign for progressive action for Native American tribes, including honoring Ernest Sickey with a lifetime achievement award for his leadership on civil rights and tribal sovereignty issues. Previously, Sickey lobbied the Louisiana Legislature to form the present-day Office of Indian Affairs, where he served as the first executive director.
Governor John Bel Edwards, recently, announced a proclamation for the state of Louisiana to officially recognize Indigenous Peoples' Day in October. This year's date, October 14, will precede the 2nd Annual Tribal Courts and Tribal Sovereignty Symposium taking place on October 24- 25 at the Valdry Center for Philanthropy at Southern University Baton Rouge.
"The purpose of Indigenous People's Day is to shine a light upon the incredible legacy of the indigenous people of this land and of this beautiful idea we call America," said David Sickey, tribal chairman of the Coushatta Tribe of Louisiana and NALPI partner. "It is a celebratory moment not to imprison us but to inform us, to guide us and to educate us as to the contributions that the First Americans have made to our country. This is a humble moment for our community. One that constantly reminds us of good stewardship and faith passed down to us by our Elders."
Within the next few years, the NALPI plans to expand with a fully comprehensive tribal law curriculum and continue to build stronger relationships with tribes that translate into more learning and employment opportunities for students.
NEXT
RSS News Feed